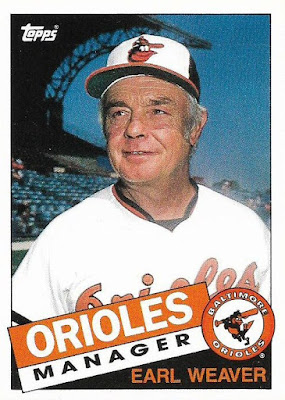 What a card: Earl Weaver returned to managing on June 14, 1985 as Orioles owner Edward Bennett Williams coaxed him out of retirement.

My observation on the front: I never saw this card in '85, but I'm sure I would have been thrilled to see Weaver back in packs.

More opinion from me: I can't say there were many times when I rooted for Weaver's O's. I always seemed to be rooting against him. But the more time passes, the more I am a fan.

Something you might know: Weaver lasted a season-and-half with the Orioles in his second term. The 1986 season would be the only full season under Weaver in which the Orioles had a losing record, and take it from me, that was bizarre. Weaver never managed losers.

Something you might not know: Weaver joked that the reason he returned to managing was to fund his cigarette habit:  "I came back because, quite frankly, Raleighs have gone from $6.50 a carton to $8.00 in the time I've been away and I've been on a fixed income." 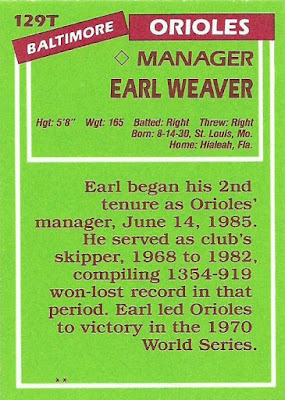 My observation on the back: Weaver would end up finishing a mere 20 victories short of 1,500 for his managerial career.

The blog wants to speak now: The Movies category is updated.
Posted by night owl at 12:33 AM