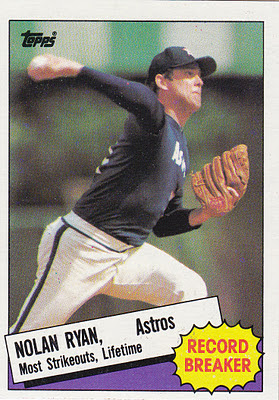 What a card: This card recognizes Nolan Ryan finishing the 1984 season with the most career strikeouts. Of course, Ryan holds the all-time strikeout lead by 800-plus Ks now, but at the time he was in a back-and-forth race with Steve Carlton for two seasons.

My observation on the front: In the mid-1980s, the Astros were moving away from the rainbow look of their late '70s/early '80s uniforms to a more sedate appearance, including this softball uniform thing. I'd rather have the rainbows.

More opinion from me: We're really taking a tour through MLB heavyweights with these record-breaker cards. Cliff Johnson is a little out-of-place so far.

Something you might know: Ryan took the career strikeout lead for good in September of 1984 and finished the year with 3,874 for his career. He was the first to break Walter Johnson's mark of 3,508, followed soon after by Carlton and Gaylord Perry. Roger Clemens, Randy Johnson, Tom Seaver, Bert Blyleven and Don Sutton have all passed The Big Train, too.

Something you might not know: Ryan finished the '84 season just two career strikeouts ahead of Carlton. It could very well have been Carlton on this record-breaker card. 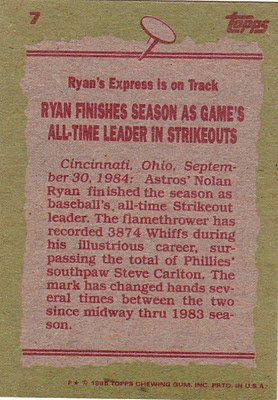 My observation on the back: Someone asked earlier if they were the only one who was bothered by Topps' arbitrary capitalization of words. They're not the only one. I mentioned it many times on my '75 Topps blog, and "Whiffs" really stands out here.

The blog wants to speak now: I've updated the music, movie and news tabs. After a recent illness, I hope to get back in the swing of updating those.

I used to love OJs cereal, I'm also the only person I know that eats Hostess Orange Cupcakes.

If you want to see some older Nolan, I have one coming up soon. There will be one later on too. My new 1979 Topps blog is up and running if you want to stop by.

I miss the rainbow uniforms.

The Ryan/Carlton strikeout race is one of the things I remember most about that time in baseball.