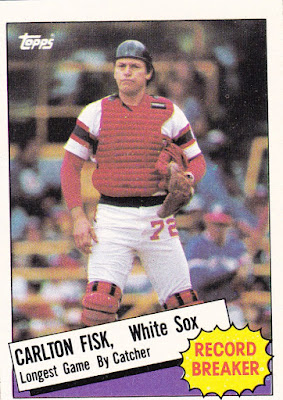 What a card: This card commemorates Carlton Fisk catching all 25 innings of a game on May 9, 1984 against the Milwaukee Brewers. That is a record he still holds and one that is absolutely incredible. Fisk is well-deserved in receiving card No. 1 in this set.

My observation on the front: Fisk's best look is his pissed-off look. It's featured on a number of his cards, including this one. I'm sure he's an excellent father, but you don't want to see that look coming at you from a son/daughter vantage point.

More opinion from me: I do not like the record breaker subset in 1985 Topps. The purple makes it look like it belongs in another set, and the yellow-red "record breaker" design puts me in the mind of a Denny's Grand Slam breakfast.

Something you might know: The White Sox wore their uniform numbers atrociously close to their crotch for seven painful years, from 1982-88.

Something you might not know: Fisk threw out four runners in this 25-inning game. He threw out two in the ninth (Ben Oglivie and Bobby Clark), one in the 10th (Dion James) and one in the 20th (Mark Brouhard). 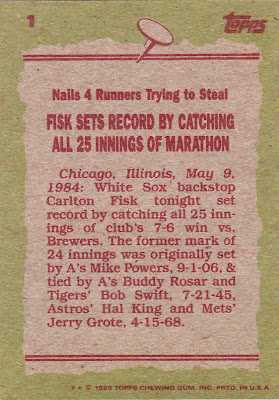 My observation on the back: That is the largest thumbtack ever.

The blog wants to speak now: Take a look at the tabs at the top of the blog. I will be updating them regularly in an attempt to immerse you into 1985 as much as possible. I was 19 years old in '85 and anyone who is 19 has a love affair with whatever year it happens to be. So you're going to know all about St. Elmo's Fire and Tears for Fears and Pee Wee's Big Adventure.

A caught stealing in the 20th inning? Anyone with more BR savvy than me wanna see if that is the latest CS in baseball history?

That's a great way to start the set. I like the idea of sharing other parts of the 1985 scene. I'm sure it'll bring back all sorts of horrible memories.

How did you make those tabs at the top? Are they part of the template you used or did you code that manually?

It's part of the template.

You've outdone yourself with those tabs. Looking forward to more posts and more content in the tabs.

You should always start a blog off with a White Sox, just saying.

Finally, I have been waiting for this one to kick-off!! '85 topps was the first set that I completed as a kid. The last card that I needed to finish it off? John Tudor!

Great blog!
I was 8 years old in 1985 and it was the first baseball card set I collected and 1985 was also the year I went to my first ballgame.

So much more could be said about this game!!!

1. The game actually started on May 8th, and was postponed until the next day.
2. The Brewers took a 3-run lead on a Ben Oglivie homer in the top of the 21st inning, but the Sox came back to tie the game in the bottom of the frame (Fisk scored one of the 3 runs).
3. Tom Seaver pitched the 25th inning to pick up the win.
4. Seaver was the scheduled starter for the actual May 9th game - and he got the win after pitching 8 1/3 innings in that game. So SEAVER WON TWICE ON THE SAME DAY.
5. Fisk did not start that game, but he caught the last 3 innings.

I recently discovered your awesome 1975 blog. I enjoyed it so much that I've decided to read this one from the beginning. I love all the 1985 trivia - I write a 1985 blog myself. 1985musicvideos.blogspot.com

Awesome blog! The White Sox only wore those uniforms through the 1986 season. In 1987, they changed to a cursive lettering across the chest and and cursive C on the hat.