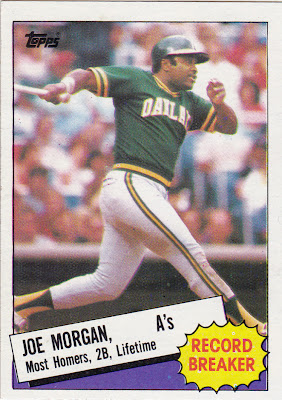 What a card: This card recognizes Joe Morgan surpassing Rogers Hornsby for the most home runs for a second baseman for a career. Morgan finished with 268 lifetime, a record that was surpassed by Ryne Sandberg. Jeff Kent now holds the record with 351.

My observation on the front: Green-and-gold is what makes the A's unique in baseball. But at other times they look like the million high school teams that feature green-and-gold as their colors. This is one of those times.

More opinion from me: Morgan has both a record-breaker card and a regular base card in this set, but he didn't play a game past 1984. That's not exactly unusual, but there are a lot of players that were left out of the set that immediately followed a player's final year. I suppose it was all in the timing of Morgan's retirement announcement.

Something you might know: Morgan began his broadcasting career in 1985 for the Cincinnati Reds. It continued (and continued and continued) through 2010, when it mercifully ended.

Something you might not know: The player who suggested that Joe Morgan flap his back arm like a chicken, as a reminder to keep his elbow up, was Nellie Fox. 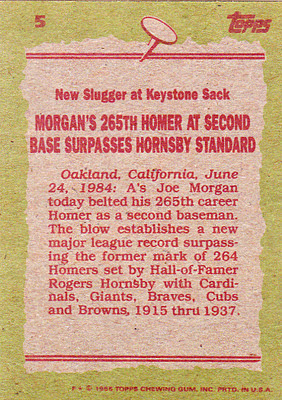 My observation on the back: Morgan's home run came off the Rangers' Frank Tanana in the first inning.

The blog wants to speak now: Takin' it easy with only a tiny update of a birthday in the pop culture section.
Posted by night owl at 1:20 AM

I hope his broadcasting career rests in peace.

I'm sure they went with "A's" rather than "Athletics" so this card would match the base cards in the set, but all of that white space in the text bar looks strange.

I didn't know that about Nellie Fox. Good tidbit.

As I've done my project I've noticed - it does seem to be rare to have guys in the set the year after they retire. Off the top of my head -

Jim Palmer retired after a failed attempt at the 1984 season, and unlike Morgan didn't get a card in the '85 set

I know that, in addition to Morgan, Ryan, Seaver, Fergie Jenkins all got cards the year after their last season.

Nice card, but I like his 'base' card from the set better. Wait until you see 'THE DONUT'!!!

I don't think you mentioned once that Joe was a HOFer. He'll be pissed about that.