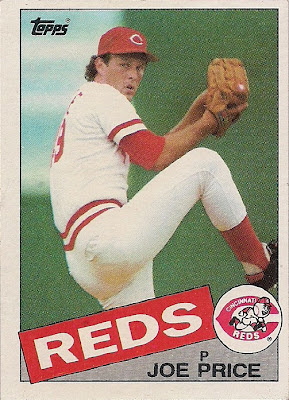 What a card: This card was issued after the second of Joe Price's seasons as starting pitcher for the Reds. He spent only 1983 and 1984 as a full-time starter. In his 9 other major league seasons, he pitched mostly in relief.

My observation on the front: Cards featuring photos of pitchers with high leg kicks rule.

More opinion from me: The Reds' uniforms of the '70s and '80s give me terrible flashbacks. I automatically think the Reds are in the National League West and dread their meeting with the Dodgers on NBC's Saturday Game of the Week.

Something you might know: Price won Game 5 of the National League Championship Series in 1987 while pitching for the Giants against the Cardinals. He threw five shutout innings in relief of Rick Reuschel who was removed for a pinch-hitter in the fourth inning.

Something you might not know: Price holds the record -- along with several other pitchers -- for the most consecutive strikeouts in a relief appearance. He struck out six straight Phillies in the eighth and ninth innings to end an 8-2 Reds win on May 8, 1985. 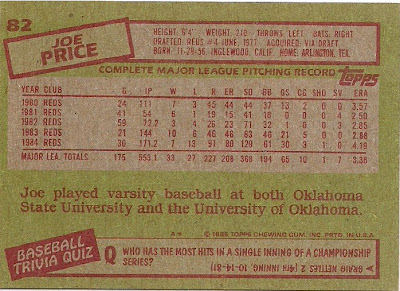 My observation on the back: Price pitched two years for Oklahoma State, then one year for Oklahoma.

The blog wants to speak now: The News and Movie categories have been updated. And I've added a lyric entry for the Music category. No need to ask. He's a smooth operator.
Posted by night owl at 12:32 AM