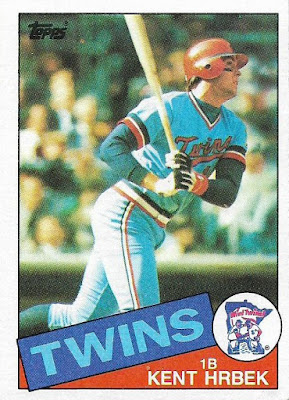 What a card: Kent Hrbek improved on his exceptional rookie season in 1982 with an even more impressive 1984, knocking in over 100 runs for the only time in his career, and finishing second to Tigers reliever Willie Hernandez in the AL MVP voting.

My observation on the front: Hrbek looks positively svelte in this photo.

More opinion from me: You cannot argue with the Twins' red helmet and baby blue uniform combination. You just can't.

Something you might know: Hrbek was the first baseman for two World Series champions, played for the Twins his entire career, and had his number 14 retired by Minnesota.

Something you might not know: Even though Hrbek is a Minnesota native, the Twins didn't know about Hrbek, playing high school at the time in Bloomington, until finding out about him from one of the Twins' concession stand employees, who saw Hrbek play against his son. 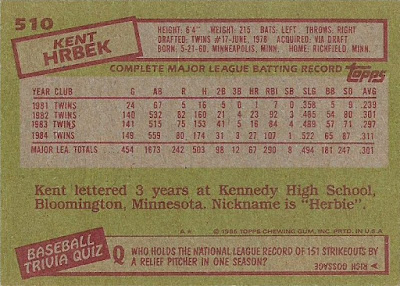 My observation the back: The Astros' Brad Lidge now holds the NL relief pitcher mark for strikeouts in a season with 157, set in 2004.

The blog wants to speak now: The Other Cards category is updated.
Posted by night owl at 2:32 AM

That's a fine looking card. I remember a sports writer did a "player a, player b" comparison story a few years back when folks were arguing for Don Mattingly in the Hall, and Hrbek was essentially identical in career stats with more rings.