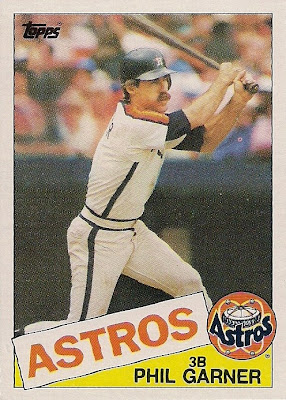 What a card: Phil Garner was entering his fifth season with the Astros as this card hit packs. His playing time began to decline in 1984, but he improved his productivity that year over a subpar 1983.

My observation on the front: Opposite-field hit ... or out.

More opinion from me: You may have noticed that we are on a real streak of mustaches right now. Six of the last eight cards have featured mustaches and some famously so. Garner was well-known for his mustache, and it was tragic when kids opened a pack of cards in 1987 and found out he shaved it off.

Something you might know: Nicknamed "Scrap Iron," Garner was a key part of the "We Are Family" Pirates of 1979 and then later managed the Astros to their first World Series appearance in 2005.

Something you might not know: Garner testified in the Roger Clemens perjury trial in 2012. Among the things he told the jury is: if you swing at a Clemens pitch on a 1-and-1 count, you're basically an idiot. You'll never hit it. My observation on the back: Garner's middle name is Mason. I think that would have made a good name for one of his kids.

The blog wants to speak now: A brief update to the News tab.
Posted by night owl at 12:12 AM