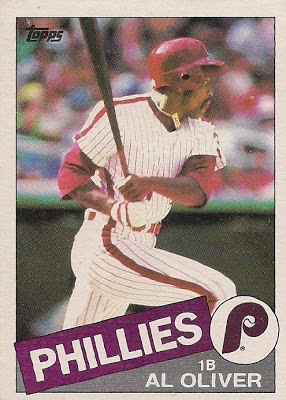 What a card: I'm a little bit surprised that Topps landed a photo of Al Oliver in a Phillies uniform. Oliver was traded from San Francisco to Philadelphia in a late August deal in 1984, leaving Topps with a little more than month to get a picture. (Oliver would be traded to the Dodgers in February of 1985).

My observation on the front: Check out that giant "Scoop" necklace Oliver is wearing. "Scoop" was Oliver's nickname, and the necklace appears on other cards, too.

More opinion from me: Oliver played for a lot of teams, but he looks right to me only in a Pirates or Expos uniform.

Something you might know: A prolific hitter, who finished just a couple hundred hits short of 3,000 for his career, Oliver is often brought up as someone who is deserving of being in the Hall of Fame. He has famously cited baseball owners' collusion in the mid-1980s for preventing him from getting to 3,000 hits.

Something you might not know: On the day that Oliver found out he was getting called up to the major leagues in 1968, his father died. 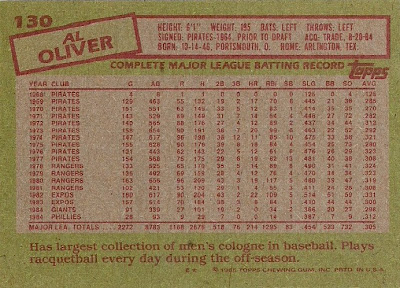 My observation on the back: This is one of the all-time greatest write-ups ever on the back of a baseball card. Where do I even begin? How about here?

The blog wants to speak now: The Ballgames category is updated with a Stanley Cup champion.
Posted by night owl at 3:45 AM

One of my all-time favorite card back write-ups as well.

I had this card in my collection for a good couple years before noticing that little tidbit.

How dd Topps know he had largest cologne collection? Somehow I peg Keith Hernandez as a contender for that tag.